LEWISTOWN — Marckis Mountz is a sweet and bubbly 4, soon to be 5-year-old little boy whose smile lights up the room. He lives in Lewistown with his parents, Jana and Ken Mountz. He is the youngest of seven children; two remain at home with him and four are adults. 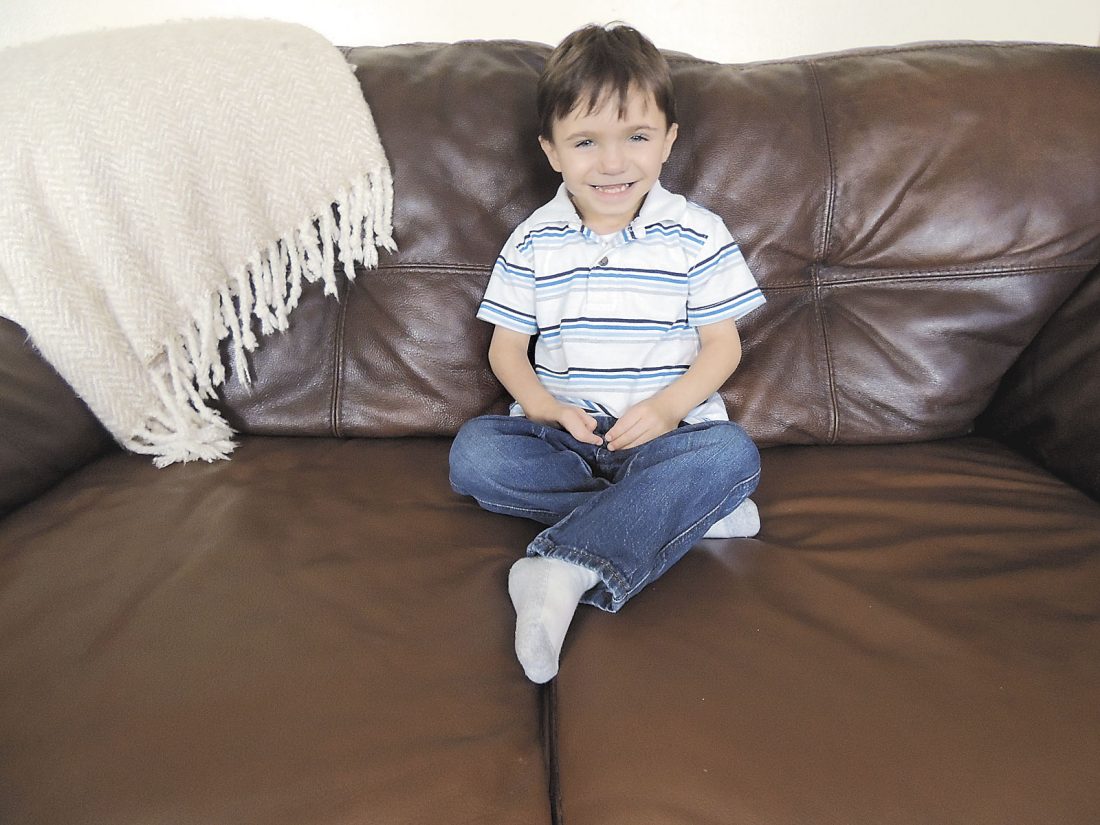 Sentinel photo by SYDNEY CROSSON Four (soon to be 5)-year-old Marckis Mountz, of Lewistown, is one of two children in central Pennsylvania with CdLS, otherwise known as Cornelia de Lange Syndrome.

He is just like any other fun-loving child. He loves to play and use his imagination. What makes Marckis so unique is that he is one of two children in central Pennsylvania with CdLS, otherwise known as Cornelia de Lange Syndrome.

CdLS is a condition with variable involvement, therefore diagnosis can be made at many ages. It causes a range of cognitive, physical and medical challenges. An estimated 1 in 10,000 people in the United States have CdLS. Born at 37 weeks gestation at 2 lbs., 2 ounces, and 14 inches long, Marckis has conquered a plethora of obstacles in his life.

He was diagnosed with the syndrome two years ago by Dr. Ian Krantz, a genetic specialist at the Children’s Hospital of Philadelphia who specializes in children with rare genetic syndromes.

Since birth, he has faced many medical complications, including surgeries for differing reasons. Sometimes there is a prenatal diagnosis, in which facial features, malformations, and intrauterine growth retardation become recognizable as CdLS.

Often, for the more severely involved individuals, there is a diagnosis made after birth in the newborn period. This is typically based on multiple findings: the small size for gestational age, facial features, hirsutism, small hands or absent digits or forearms, incomplete extension of the elbows, and small feet and/or internal organs abnormalities.

For less severe cases, there are fewer physical features, so the diagnosis tends to be made later. There continues to be small size, often feeding problems and/or the development of gastroesophageal reflux. There is often developmental delay with early milestones occurring later than average. Even in the most mildly affected, speech will usually come in later. Occasionally, individuals reach adolescence or even early adulthood without a clinical genetic evaluation, and the diagnosis can be missed until that point. Other specialists who may suspect this condition include pediatric gastroenterologists, cardiologist or otolaryngologists.

On May 11 at The Restaurant, owner Bethany Williams raised $310 during a three-day Mother’s Day event in honor of Marckis. All proceeds were donated to the CdLS foundation.

Marckis receives services from Tuscarora Intermediate Unit 11 that helps him with his speech and motor skills. Due to his inability to fully communicate, he was awarded a communication device from Variety of Pittsburgh, a children’s charity.

Marckis is currently 22 lbs. and 34 inches tall. He is able to walk and is communicating little by little.

“Because of him, I don’t look at people for their disability — I look at them for their ability,” his father Ken said.

Marckis’ parents want others to know that no matter what challenges him, he defeats. Although his stature is small, his smile is huge, and one day, this little boy will “move mountains.”

Despite all the challenges, he truly is a miracle.