‘Expect problems,’ she told us. I had heard those words before, yet my brain couldn’t make sense of them. ‘What kind of problems?,’ I asked, my voice trembling.’ 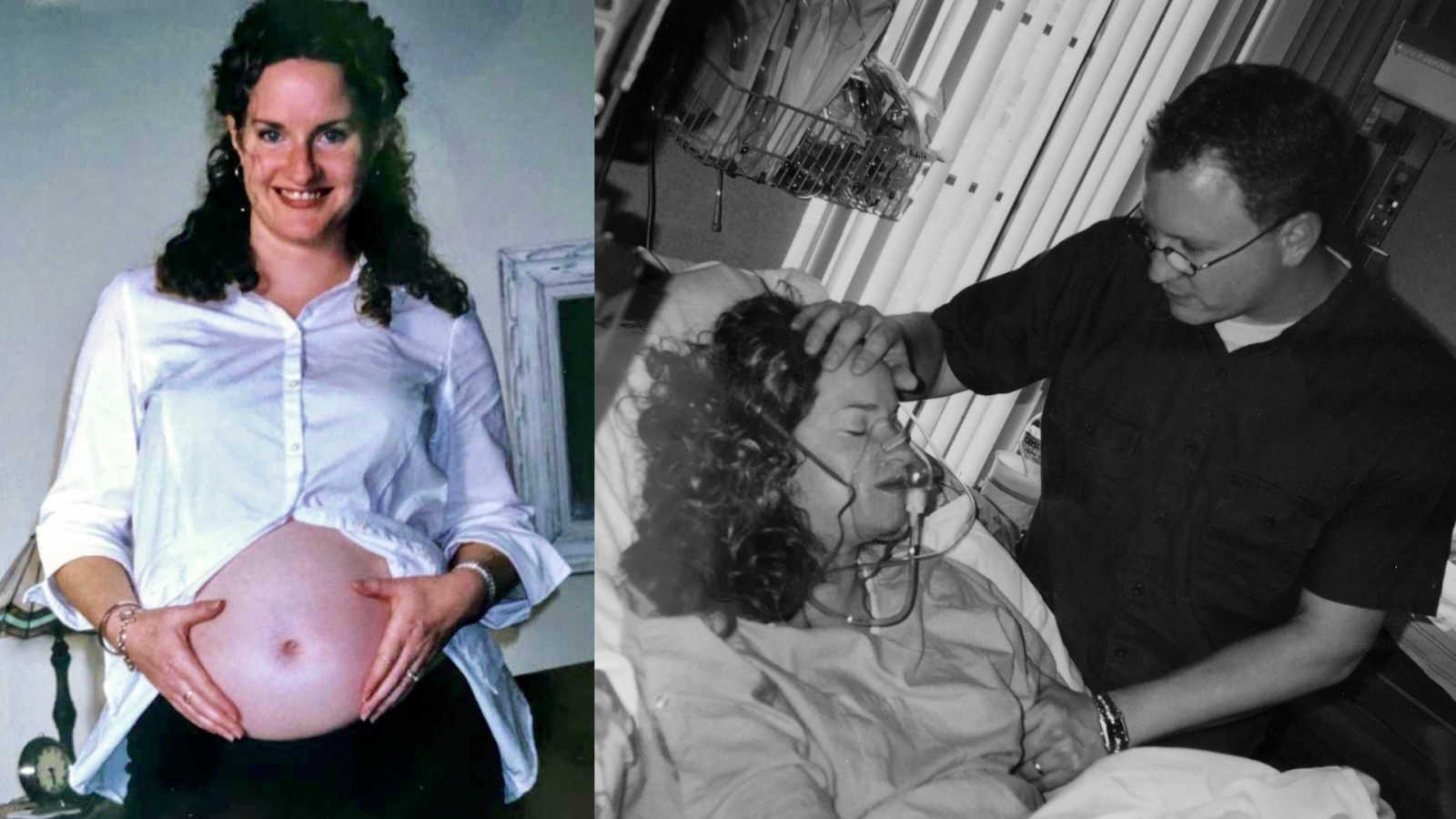 “Tension filled the silent labor and delivery room. Much like the oppressive humidity of a hot summer day, the air was thick with fear. I sat up in bed, my back supported by pillows. I was surrounded by five doctors, a nurse, Steve, and my twin sister, all of whom were ready to spring into action the minute our baby was born.

We all knew something was wrong. It’s why the doctors had decided to induce labor two weeks early. It’s why Steve and I had met with a perinatologist the day before. She had confirmed that our baby was small – too small.

‘Expect problems,’ she told us.

Expect problems. I had heard those words before. I knew they were common English words, and yet my brain couldn’t make sense of them.

‘What kind of problems?,’ I asked, my voice trembling. I was fighting the tears but failing in my efforts to hold them back.

‘The baby could have a genetic disorder,’ she said, ‘or a fatal condition.’

Twenty-four hours later, I was in the delivery room, and a nurse was gently encouraging me, ‘One more really good push.’

Our sweet baby David came into the world silently. The doctors whispered and moved quickly behind me as they cleaned him, weighed him, measured him, and evaluated him. After what felt like an eternity, Steve brought him to my bedside and placed him in my arms.

I cradled my precious, 4-pound baby, taking in every part of him. I touched his soft, full head of hair and stroked his beautiful pale skin. I held his small hand in mine, his left hand with only two fingers. I let my eyes take in the sweetest face I had ever seen.

‘Here you are,’ I whispered. ‘You are small, but you are strong. You must fight harder than most. Life will not be easy for you.’ 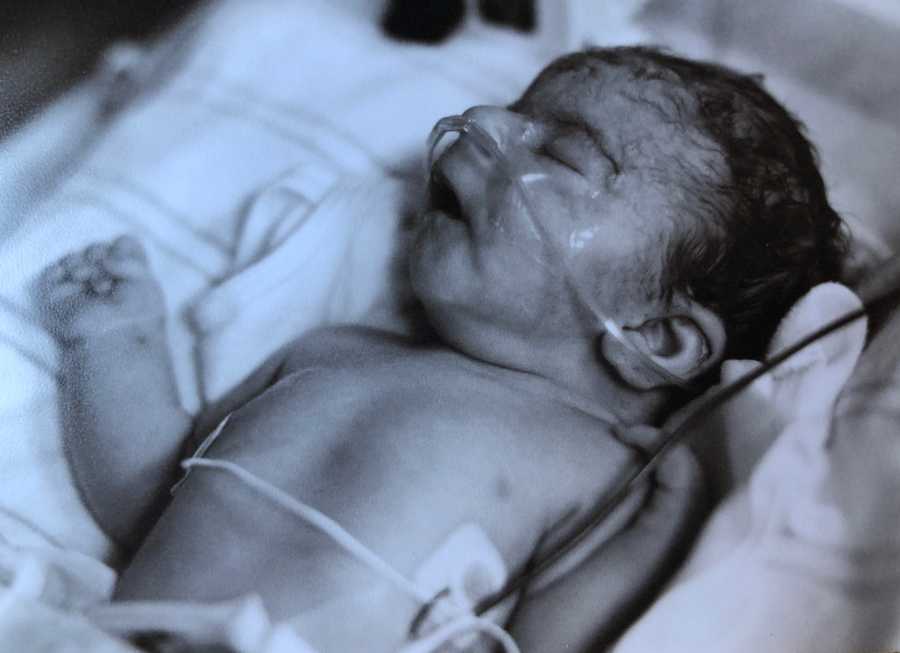 ‘Expect problems,’ the perinatologist had said.

As I cradled my tiny baby, I could feel the world as I knew it slipping away. Just a few days before, we’d had lunch with friends, talking and laughing and dreaming about who this baby would be.

I hardly recognized myself in the memory. I had pushed through the doorway into an utterly unfamiliar and painful new life.

I grieved the baby I lost, the one from my imagination who never existed. I grieved for what this sweet baby would never have – a normal life, a normal childhood. I grieved the end of our perfect story.

We had stepped through the doorway and into the unknown. I knew we had begun a difficult journey, but I couldn’t yet see the unimaginable beauty that lie ahead.

The first days of David’s life were full of beeps and buzzes from various equipment in the Neonatal Intensive Care Unit (NICU). But the jangling noises around us were nothing compared to the loud voice in my head that couldn’t stop asking why.

I pleaded with God to help me make sense of the chaos in my mind. Accomplishing the most basic tasks felt like a heroic feat. Just taking a shower or eating a snack was exhausting. Every moment was filled with more questions.

Holding David close to my chest, I let my thoughts wander. A dark thought crossed my mind. ‘Maybe David will die, and we’ll be able to forget this whole thing ever happened.’ As soon as that thought came, it was quickly followed by another. ‘God, please, please don’t let my baby die!’ I was a mix of conflicting thoughts and emotions. I was broken, on my knees, unable to stand. I had nothing to offer God or anyone else. I was empty, except for the whys that haunted me.

Two days after David’s birth, I looked out the hospital window to see a familiar oak tree. Steve and I had passed that tree week after week while attending prenatal classes at the hospital. It stood between two driveways, one driveway entering the hospital and the other exiting the hospital. Its tall, sturdy branches extended high and wide, dense with leaves. Although I had seen it several times, I hadn’t really noticed it. But on this day, it took me by surprise. My whole world has turned upside down. How can that old oak tree still be standing? Everything around me looked the same, exactly the same, but I was not the same. I did not know myself at all. Who am I? I entered the hospital one person, but I would exit the hospital a different person.

We drove by that oak tree every day for weeks while our tiny baby was in the hospital. It stood there, tall and confident, a symbol of the unchanging world around us. I resented that oak tree standing there as if nothing had happened. It stood steady between the way in and the way out, a silent witness to the fact that Steve and I were not the same people who arrived at the hospital the day David was born. Everything had changed.

As I looked out the window, I thought about Trent, a student I had when I taught Special Education, and what he had taught me – that we human beings are body and soul. There is an unseen force connecting us. We are capable of loving deeply without words. I did not know what David’s life would hold. I did not know what abilities or disabilities he would have, but I knew he had a beautiful soul. I knew there was a whole soul inside his precious and broken little body. 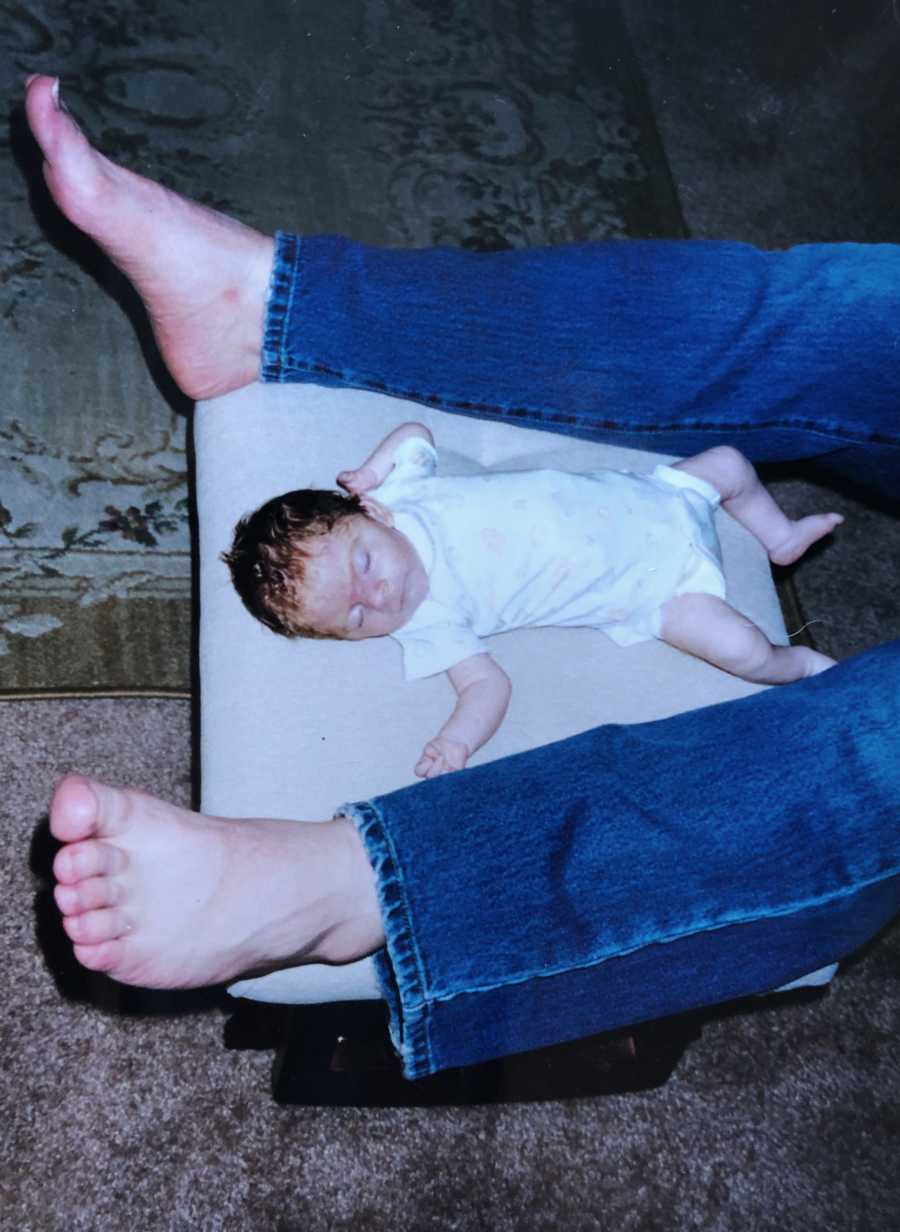 At the cellular level, every bit of David’s body had a chromosomal abnormality. His body was not the way it was supposed to be. If it were a map, we might say the coordinates were incorrectly labeled. If it were a recipe, we could say it didn’t have the correct ingredients in the correct amounts. If it were a computer, we might say there was a typo in the operating system code. By any measure, David’s body was broken, imperfect, flawed. His soul, on the other hand, was intact and whole. David was body and soul. His soul simply resided in a body that did not cooperate – because it could not cooperate.

I wanted to know David’s beautiful soul, and I wanted him to know mine. I hoped that David and I could forge a deep connection. After all, he was part of me. I was his mother and he was my son.

If that unchanging oak tree could have talked, maybe it would have steadied our souls with words of assurance and comfort. Breathe deeply. Hold on to hope. Beautiful things are ahead – a connection deeper than you can imagine. I wanted to believe that, but I couldn’t feel it yet. I was still grieving, still trying to make sense of a world that seemed to make no sense at all.

It’s been 16 years since our tiny David was diagnosed with Cornelia de Lange Syndrome. That day I wondered if the sun would ever shine again and I’ve been surprised to find it shines brighter! David’s smile has been like glue, healing the cracks in my heart. He has shown me what it looks like to live bravely. He’s shown me how to love bravely. I love David exactly as he is—and amazingly, David has taught me how to love myself exactly as I am.” 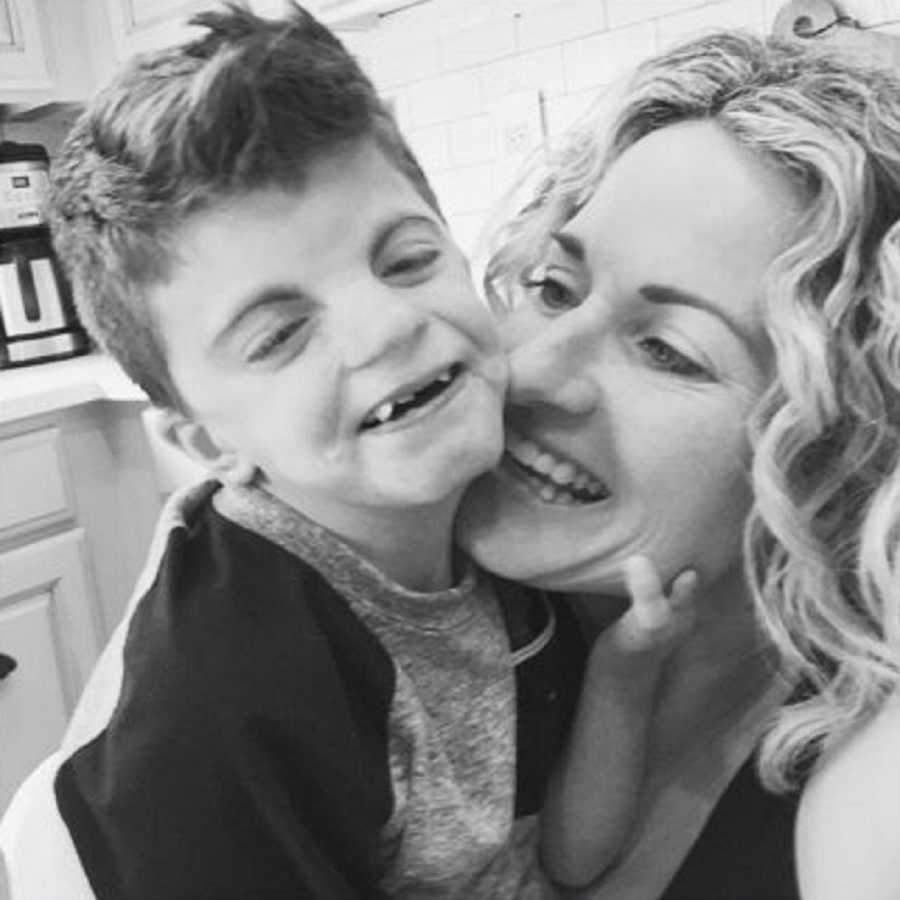 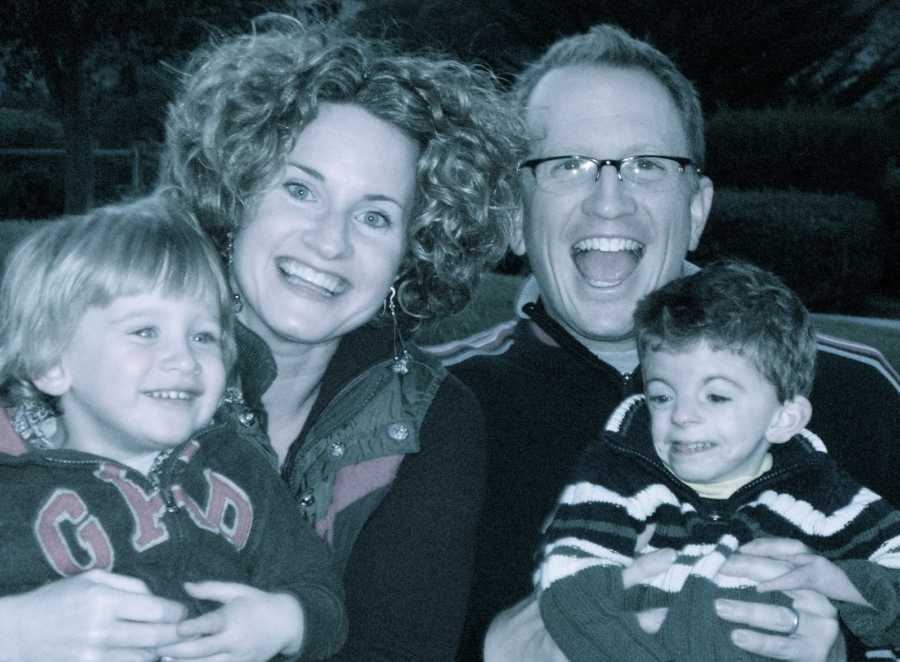 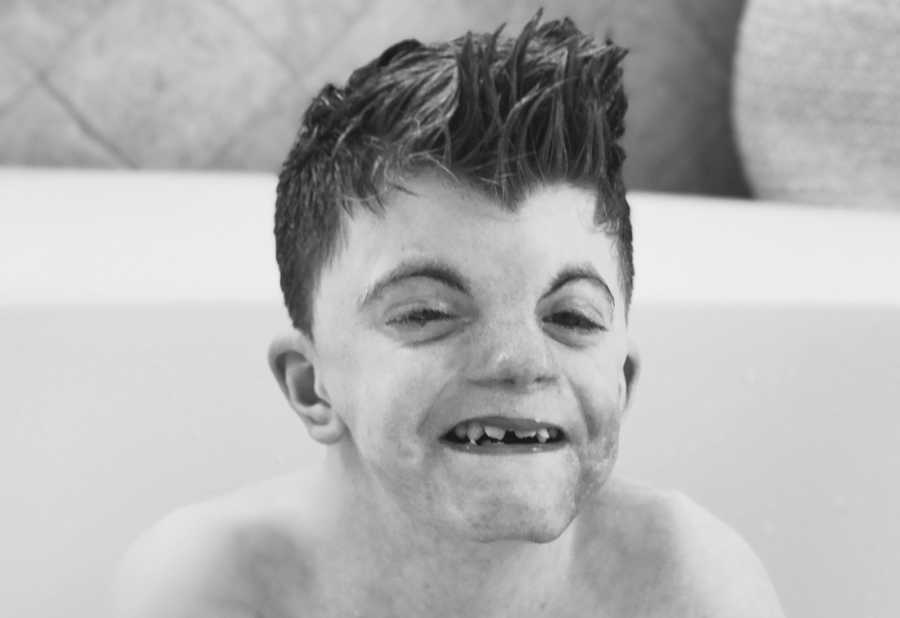 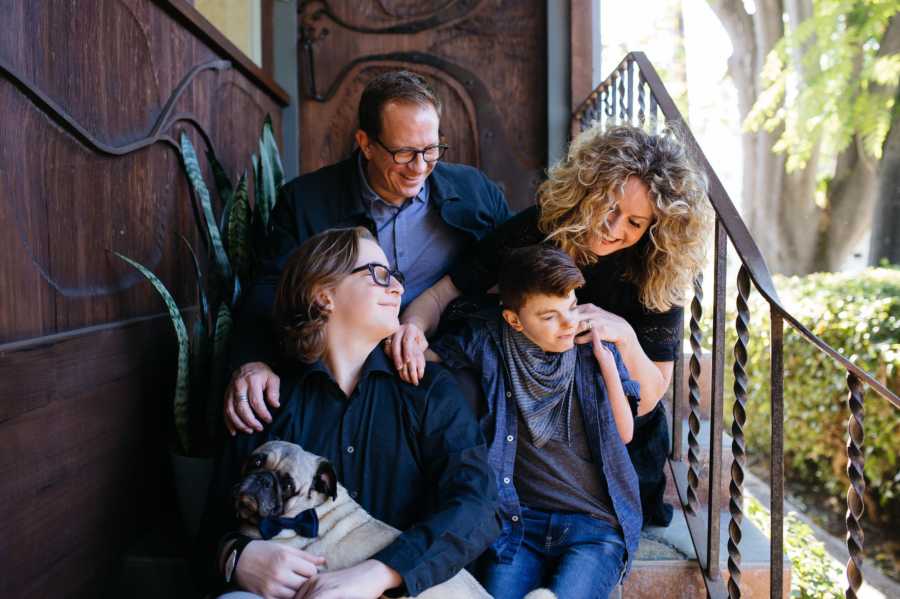